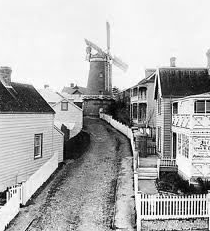 New Zealand, as the Polynesians discovered when they settled over a 1000 years ago, had no "native wheat", or any other wild grasses that could be cultivated for grain and therefore it was difficult to maintain a constant food source over winter.

In the early 1800s, Ruatara, chief of the Ngapuhi people, was among the first to plant wheat as a crop in New Zealand.

1820 Agricultural plough put into land for the first time at KeriKeri. During the 1820s missionaries sent letters back to their homeland boasting about the fields of wheat they had planted

1835 The first mill was established at Waimate and by the following year a stock pile of 12 months of flour was made. By 1837 the mill was working to full capacity and 35 acres of wheat were harvested.

1838–44  Mills were established in other settlements including Auckland, Wellington and Hokianga. The mill was the central feature of a community once the land had been cleared and settlements established. By the 1840s wheat growing was well established by both the Maori and Europeans.

1845–55 Golden Age for Maori agriculture; they were the main suppliers of food for settlers. As the amount of harvest increased so did the need for efficient mills. The first Maori-owned water mill was built at Aotea on Raglan Harbour in 1846. Over the next few years, mills flourished with over 40 in the Auckland area alone.

1853 First Canterbury mill at Christchurch was opened, with the owners proudly announcing that grain would be ground for 1 shilling a bushel (or about one 36 litre bucket). 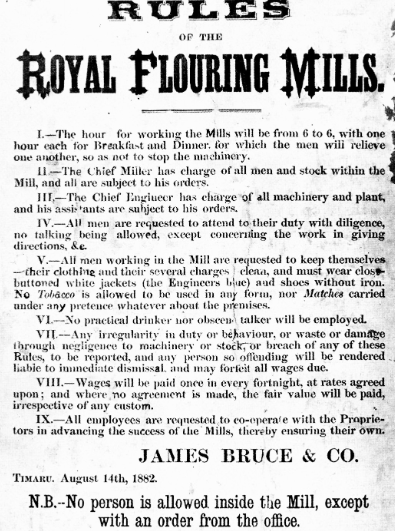 1855 The first records of wheat production were collated showing that the North Island had 994 hectares and the South Island 3,163 hectares planted in wheat. The preoccupation with milling by the early population of New Zealand highlights the importance of bread as a staple part of the diet. Settlers brought this habit with them and the Maori quickly acquired a taste for it.

1870s Roads and railways were changing the way of life in rural settlements. Previously every small town had its own wheat harvest and mill but with the advent of railways, areas in which climate or soil conditions were unsatisfactory could now receive flour from other parts of the country. As with Maori mills in the 1860s, many European mills closed down after 1880s.

Since that time, wheat has been one of the mainstays of New Zealand's arable cropping industry. Today, wheat production is centred in the greater Canterbury area and in 2009 46,900 hectares of wheat was harvested, accounting for 87 percent of the national total. In the year ending June 2009 the yield was 408,400 tonnes of wheat. However, these figures do not represent the total quantity of wheat used in New Zealand, as wheat has been imported primarily from Australia since the early 1930s to ensure sufficient supply for bread making. The quantity imported has ranged from none to over 250,000 tonnes per year.

Today, wheat is of major significance to New Zealand's food industry, being used in a wide range of baking goods, from breads and biscuits to food thickeners. Wheat grain and milling by-products are also used as stock feed. 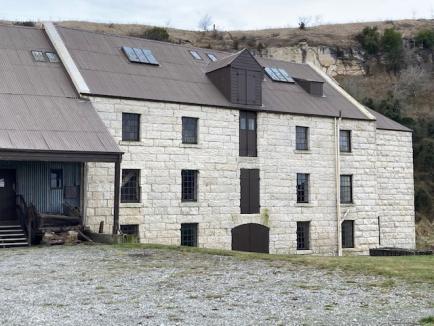 An example of a typical mill of the day was Clarks flour mill built at Maheno, North Otago.

1865 The mill was built of stone and the flour was made between two wheel shaped stones, with the lower one fixed and stationary while the top stone turned against it, crushing the wheat which was poured in through a hole in the middle. As the wheat was ground, grooves cut in the rock guided the grain along progressively smaller channels to the outside rim. The power to drive the stones came from a 3 metre wide water wheel, which was turned by a stream. The quality of the final flour depended on the skill of the miller.

1880 Unlike other mills, Clarks Mill did not shut down and the first technology update occurred as the wheel was replaced with a water turbine which was more power efficient and allowed the miller to control speeds more effectively.

1901 The mill was upgraded, with the old stones discarded and replaced with roller mills. This technology is still in place today. Roller mills first crack the grain and then reduce the wheat to a fine powder through progressively smoother surfaced rollers. The bran and germ are separated out along the way.

1912 Water was still essential to the production of power. A coke-operated gas engine was installed and used when drought conditions cut the water supply.

1942 Electricity was introduced but up until the 1960s water remained the main source of power.

1977 Mill sold and closed down. By this time modern equipment was running alongside machinery installed at the turn of the century.

Today The Mill has been restored to operating condition by a team of dedicated volunteers. The machinery grinds into action on the last Sunday of each month, offering visitors a thrilling opportunity to see, hear and feel what it would have been like to work in the mill. To book a visit to Clarks Mill