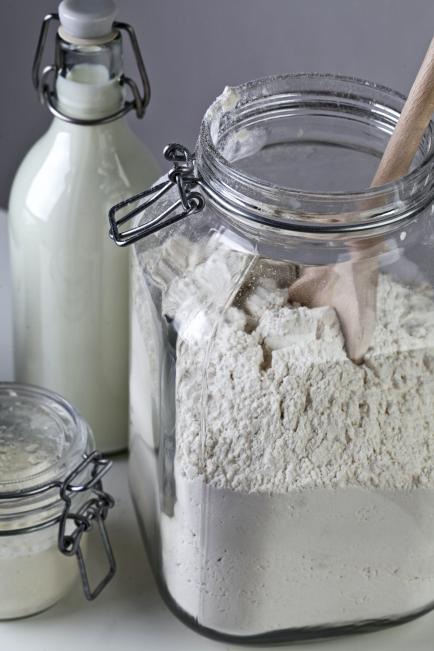 Flour is a fine powder made from wheat which we use in cooking.

Depending on the wheat and the blending processes used by millers different types of flour are made, each with a different purpose whether it might be for:

Quality tests are completed before the milling process begins to ensure that wheats have been tested to determine their best potential end use.

Some wheat is eaten in grain form. Whole wheat can be flaked, shredded or treated in some other way to make breakfast cereals or muesli bars.

Flour can also be separated into its major components:
Different Types of Flour

Bread making flour is made from a semi-hard wheat with a medium to high protein content. This type of flour is referred to as a strong flour. When water is mixed with flour, two of the flour proteins combine to form gluten. It is gluten which forms the network that will stretch as the dough ferments and carbon dioxide gas is released. On baking this stretched gluten network sets to give the structure and texture to bread. Strong flour is needed to ensure that enough gluten is formed to produce bread of good volume and appearance.

Puff pastry should also be made from flour with a high protein content as it is the water absorbed by the gluten that, with the folded-in fat, forms the layers and makes the pastry puff up during baking. For pastry, use the same type of flour that you would use for making bread.

The ideal flour for use in baking cakes and biscuits has a lower protein content than bread making flour and is milled from soft wheat varieties. The protein needed to form the structure of cakes and biscuits is not from the flour but from other ingredients such as egg. Use of cake flour gives a tender soft product as the gluten in the flour does not contribute significantly to the cake structure. If bread making flour is used, then the baked cakes will be tough and dry while biscuits will not spread when baked.

Self-raising flour is ideal for making scones and pikelets. These are made by combining biscuit flours with chemical aerating agents similar to baking powder. The aerating agents cause batters to rise when heated. The flour and raising agents are sifted together many times to ensure even distribution and consistent product quality.

Flour should be stored in a cool, dry cupboard and preferably in an airtight container.

Only buy flour in quantities that will last a maximum of two to three months. This is particularly true for wholemeal flour which contains the germ part of the grain as this can develop off flavours over time.

For extended periods of storage, the freezer is a great place to store flour to keep it fresh. Try to avoid mixing new flour with old and if you are not using the flour regularly, make sure bags are secure to prevent infestation by insects.