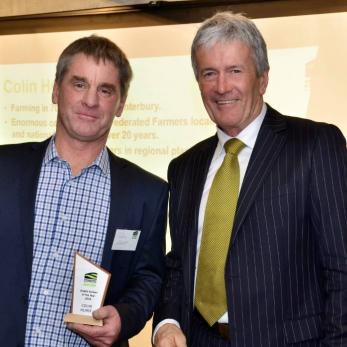 Hurst, who has farmed at Makikihi since the mid-80s with his family, is the 2019 Arable Farmer of the Year, and was elected at the group's annual meeting on Monday for a three-year term. He replaces Karen Williams, who is vice-president elect of Federated Farmers of New Zealand.

Hurst is keen to lift the profile of the arable sector among consumers and fellow farmers.

"Most people know we produce cereal grains used in bread and a host of other staples, and all the malting barley needed by our brewers, but we also grow the pasture seeds essential to our livestock farmers, not to mention brassicas and other feed crops, and seed production for domestic and international markets.''

The arable industry’s export receipts were forecast to hit $260 million in the financial year just ended, a 10.2 per cent increase.

As well as serving Federated Farmers at national, regional and branch level, Hurst has been heavily involved in the South Canterbury Rural Support Trust, the Arable Industry Group’s Herbage Seedgrowers Subsection, United Wheatgrowers and the Foundation for Arable Research.

He has been a staunch advocate for farmers around the Seed Quality Management Authority table, on the Fertiliser Quality Council driving the development of a physical standard for fertiliser, and at a multitude of local authority planning and hearing processes.