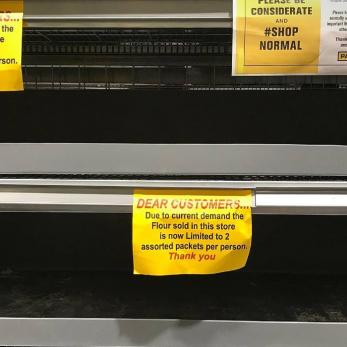 New Zealand looks set to exit the coronavirus lockdown a little more plump than it went in.

The country went into a flour-buying frenzy with the announcement of level four restrictions last month and new data from Foodstuffs shows just how much the pantry staple's popularity soared.

"The numbers don't lie, and it seems there is heaps of flour around New Zealand, it's simply in peoples' pantry cupboards," spokeswoman Antoinette Laird said.

Or already turned into bread and devoured, other statistics suggest.

In the three weeks before lockdown, New World shoppers alone stocked up on enough yeast to make 710,000 loaves of bread, an increase of 241 per cent on the same period last year, when they bought enough for just 208,000 loaves.

"It could be all the extra time we have on our hands to bake homemade bread and pizza dough. Knead, rise, bake, eat, repeat," Laird said.

"Or simply a great excuse to get into the kitchen as a family and do some from scratch cooking that we probably didn't have time to do pre-lockdown."

Whatever the reason, convenience seemed to have taken a back seat during lockdown as Kiwis rediscovered their inner bakers, she said.

However, not everyone had limitless kneading time available and many were in the market for an easier option.

One model was now the third-most popular product out of the 108,000 on the site, sitting higher than Apple's latest AirPods and Samsung's current flagship phone.

"In normal circumstances, we would not expect to see bread makers rank so highly," Matinvesi-Bassett said.

PriceSpy also found kitchen mixers had increased in popularity, up 56 per cent year-on-year between March 1 and April 13, with clicks spiking over Easter.

"The lockdown certainly seems to be getting more people baking at home," Matinvesi-Bassett said.

"Whether this trend will continue in the future remains unknown but it's pretty clear from our data and on social media that many are getting creative in the kitchen."