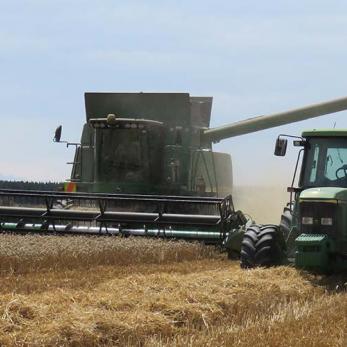 Despite a 500% increase in demand for flour under lockdown there is no shortage of grain and following lockdown that’s good news for the wheat industry, Arable Food Industry Council chairman Ivan Lawrie says.

Talking to millers he said there’s no lack of flour and there’s increasing demand for grain.X

“First it was toilet paper flying off the shelves, next came flour, pasta and bread and still the supermarkets can’t stock the shelves fast enough.

“There is unprecedented demand but no shortage of supply,” Lawrie said.

Millers are working flat out so there’s no lack of product.

The shortage on supermarket shelves is simply because of a switch in demand from 20kg bags to bakeries to 1.5kg packets as old-school home baking became the order of the day.

“It’s been a challenge to keep up the smaller packages and the fear now is what happens after lockdown when you look in the pantry and wonder what you are going to do with 15kg of flour.

Following a good harvest cropping farmers are well placed to keep the mills supplied with grain and there’s certainly every indication demand will increase.

“The market is strong and there is no lack of supply because we have had a very good harvest and demand is good,” Lawrie said.

“We could take a very selfish approach and blow the trumpet for this is why New Zealand needs to become self-sufficient in milling grain supply but we are not taking that approach.”

However, it does highlight the vulnerability of the system and bodes well for NZ’s arable sector goal of returning to milling wheat self-sufficiency by 2025, Lawrie said

Despite having ideal growing conditions and achieving some of the highest yields in the world, most of the bread sold in the North Island is made from imported wheat.

This is the reality because it’s possible for North Island mills to land wheat from Australia cheaper than South Island farmers can send it up because of the high transport costs associated with shipping large volumes of grain.

Before deregulation NZ was self-sufficient in milling wheat.

“We can do it again so long as we have the right infrastructure set up to do it efficiently.

“We are getting the message it’s what NZ consumers want.”

The goal is bold and ambitious but with strong, committed partnerships between all stakeholders it can be achieved, Lawrie said.

“Consumers want to know the bread or baked goods they are buying are made from locally sourced, traceable wheat.”

One major issue yet to be hammered out is the cost-effective way of freighting South Island grain to the North.

The second is ensuring understanding of exactly what consumers want and producing enough grain to meet demand.

“We have two groups each working separately on these two key issues to get the right infrastructure and logistics in place.”

NZ growers produce about 100,000 tonnes a year of wheat for baked goods.

This amount will have to increase to 300,000 a year to meet demand.

There’s also been a notable increase in demand for speciality and organically grown grains.

“This is a niche market but proving a lot larger than we think.

“We are looking at expanding growth in the North Island but there are challenges with storage.”

There’s also potential for milling wheat to fit in with other farming practices, both in the meat and dairy sectors in crop rotation such as dairy finishing units growing milling wheat on 15% of their land.

The crop would use the nitrogen produced by the cows and grow a good wheat crop.

Meanwhile, cropping farmers have turned their minds to new season crops and getting seed in the ground.

So it’s key for growers to have early indication of what market demand will be.

“Farmers need to hear early so they can grow crops accordingly to meet the market demand come harvest.

“In saying that, contracts have come out earlier and uptake has been good with existing demand for all contracts fulfilled.”

On the global scene while there are reports coming out that countries like Britain are holding back grain to keep for their own supply, helping to push grain prices to season highs, Lawrie said that is not affecting the NZ market.

Prices for Australian grain have also lifted week as traders try to cover positions for the second half of the year.